Although crime dramas focus more and more on the forensic analysis of physical evidence (e.g. DNA), the human element of the story, particularly the evidence provided by victims/witnesses, remains a compelling component.
In real life, eyewitness testimony plays an incredibly important role in police investigations. As eyewitnesses are human, the accuracy and usefulness of the evidence they provide can only be as good as the human mind allows. Understanding the psychology of how the mind works, particularly how we remember, is therefore a crucial component in helping to evaluate and improve police investigations.

You're about to see video footage of a staged crime. Please watch it carefully.
Do you think you would make a good witness if you were now interviewed by the police? Would you be able to remember everything about the crime? Can you remember what the person was wearing? Can you remember what the person took? Can you remember how many computers were in the office? Did the person have to unlock the door before entering the office?
Although details such as these are important, perhaps the most important information the witness can provide relates to the identity of the perpetrator. As well as describing the appearance of the perpetrator, witnesses are also often asked to asked to identify the perpetrator from an identification parade. Of course, the police first have to find and arrest a suspect before they ask the witness to make an identification, which usually means a gap of 4 to 6 weeks between the crime and the identity parade.
So let's see how good a witness you would be. In a moment we're going to show you a photo lineup. There will be a letter next to each of the photos in the line-up. All you have to do is work out who the perpetrator is and remember their letter.
Like most witnesses, you probably didn't find it that easy to work out what the perpetrator looked like. So let's work out how you did.
Did you pick one of the letters? I'm afraid that if you picked anyone from the identity parade, you made a misidentification. The perpetrator of the crime you saw previously wasn't in the parade, so if you picked out anyone you picked out an innocent suspect.
So if you did identify an innocent suspect - why was that?
Psychological research has pointed to a number of reasons that could explain this. Amongst these are the fact that our memory for unfamiliar faces is very inaccurate. The person you saw commit the crime was unfamiliar to you - you only saw them for a few seconds. It's therefore very hard for you later to identify them, to recognise them.
Secondly, you saw all the faces in the identity parade at the same time - that is, they were presented simultaneously. When you see faces in the identity parade at the same time, what you tend to do is try to pick the best match for the perpetrator, even if that person isn't the perpetrator. So you look amongst all the faces and you pick the one that most resembles the perpetrator, even if it's not them.
Thirdly, it's possible that you picked someone out from the line-up because I told you to. At the beginning of the identity parade, the instruction that was used was a leading question. It suggested to you that the perpetrator was going to be in the parade, because I said "Pick out who it is and remember their number". So maybe the reason you picked someone out was because you were told to.
Psychologists in the police have worked hard in the UK to overcome these problems, so suggestive questions are not used and the faces are shown one at a time to avoid witnesses simply picking the best match. However, it is very hard to overcome the fact that our memories tend to be very inaccurate. Misidentifications can lead to someone being prosecuted for a crime they did not commit. In 2007 DNA evidence finally exonerated Jerry Miller, who had spent 24 years in prison for a rape he did not commit. His conviction was based on evidence from 2 eyewitnesses. Their misidentification led to an innocent person being imprisoned for most of their adult life, whilst the real perpetrator walked free. Jerry Miller's case was the 200th case the US Innocence Project successfully appealed using DNA evidence. Eyewitness identifications played a role in 77% of these wrongful convictions. 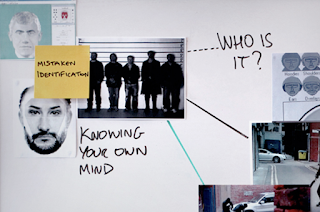 Research has found that showing a witness a line-up and asking them, ‘Who is it?’, tends to make the witness select someone, even if they’re unsure whether it’s the person who did commit the crime.
The video Mistaken identification, which you watched previously, demonstrates that changing the way a question is asked can have a dramatic effect on the answer and can help reduce the rate of mistaken identifications dramatically. For example, including an instruction such as, ‘The person you saw commit the crime may or may not be present in the line-up, and if you don’t think they’re present, you should say so’, can remove the suggestion that the person definitely is in the line-up. It also removes the suggestion that the witness has to choose someone.
You might be surprised to learn that making such a minor change to an instruction can have such a dramatic effect on memory and decision making. In fact, the way our memories actually work is quite different to how most people imagine. Psychologists refer to our knowledge of how our minds work as ‘metacognition’, and of how memory works as ‘meta memory’.
Next, you will be quizzed on your understanding of how your mind works.

1.1.3 What you think you know about your memory

Following are some questions your to check understanding of how your mind works. Don’t worry, this is not a test, but instead an opportunity to explore some common myths about memory and other mental processes. Try not to reveal teh answer until you've tried to answer the question at least once.`