I am a retired Police Superintendent, Operations Commander, with CID and other investigative experience. I have studied this case for 12 years, in conjunction with experts in various fields.

I refer to the recent report by Sir Richard Henriques of his review of Operation Midland.

"Sir Richard, who was commissioned to review the investigation by the Metropolitan Police in February 2016, concluded:
“The principal cause of the many failures in this investigation was poor judgement and a failure to accurately evaluate known facts and to react to them.
“A major contributing factor was the culture that ‘victims’ must be believed.
“Whilst the responsible Officers assert that they kept an open mind, several failures can only be explained by an unwarranted and disproportionate belief in ‘Nick's’ credibility.”
The review said that major inconsistencies between Beech’s accounts, a lack of corroborating evidence and overall “implausibility” was not properly challenged.” [ Link supplied below]
It is evident that Operation Grange may have fallen into the same trap of poor judgement, specifically :

• has failed to accurately evaluate known facts, and to react to them
• has followed the culture that the ‘victims’ [the McCanns] must be believed
• has not had an open mind, but has had an unwarranted and disproportionate belief in the ‘McCanns’ credibility’
• has not taken account of the major inconsistencies between the McCann’s and their holiday friend’s and other witnesses’ accounts; of the lack of corroborating evidence; and further that the overall ‘implausibility’ of the account has not been properly challenged.

The Operation seems deliberately to be ignoring the points of evidence against the ‘official account’. The most notorious of these include the alerts by the British blood and human cadaver detection dogs; the clear evidence of forgery of the photo of the family by the pool; the exposing of the original untruths about forced and broken shutters; the total lack of evidence of entry, presence and exit; the impossibility of the alleged regular checking system; bizarre and contradictory statements from the parents themselves about the ‘comfort blanket’ and the pyjamas . . . and a plethora of others. The list is too long even to append here. Not one has been explained or refuted.

Operational Policing is clearly not within the immediate responsibility of the Home Secretary.
The continued funding of Grange over eight years at a cost of at least £ 11.6 million (2018), however, is.
(By contrast Operation Midland lasted only 16 months, and cost a relatively insignificant £2.5m)

The position of PM Mrs May, might have been compromised by her decision whilst Home Secy. to receive Dr Kate McCann at a Downing Street reception, and to introduce her as a ‘victim’ to Royalty. [Link below]

PM Mr Cameron, might similarly have been compromised by his decision to write personally to the McCanns in terms inappropriate during an investigation into a missing child, when it is established fact that in over 85% of cases the close family or friends are ultimately shown to have been involved and should therefore always be treated as prime suspects. Met. DCI Colin Sutton turned down the opportunity to lead Grange after learning that the investigation was going to be very narrowly focused, and away from the McCanns or their friends, contrary to his oath, his professional duty, his experience and his training. [Link below]

Professionals from several fields have expressed serious doubts about the path the investigation is following, and serious commentators across the world have presented reasoned and evidenced thoughts about many aspects of the case and its investigation, some presented as challenging documentaries

It is clear that PM Mr Cameron, having inherited the poisoned chalice of the involvement of Government and the Security Services from Blair and Brown, was also put under intolerable pressure to set up Operation Grange given the threats against Mrs May, as Rebekah Brooks admitted at Leveson.

We do not believe that your position has been compromised in any of these ways.

I note that in a refreshingly robust and professional manner you have already instructed Sir Thomas Winsor to conduct an inspection of the Metropolitan Police, but observe that Operation Grange is a tightly focussed issue, stemming from the involvement of a previous Labour PM, Blair, and his Chancellor, Brown, (the reason for whose involvement is far from clear.)

On 10 October 2016 I sent a full letter with several appendices of evidence and references to your predecessor The Rt Hon Amber Rudd PC,MP, with copies to Mr Cameron, and to the Met. Commissioner.
Several dossiers of fully referenced evidence and analysis have been sent direct to Grange, and a formal document with appendices of relevant and incontrovertible evidence was sent to the Portuguese Attorney General, and to the Polícia Judiciária (PJ). [Link below]
All have acknowledged receipt.

Retired Portuguese DCI Dr Gonçalo Amaral, the original SIO in the case, who wrote the book in which he referred to political involvement which has been endorsed by the Supreme Court in Portugal as an honest account and consistent with the evidence, has also been kept informed of our research.

We can provide duplicates on request.

In light of the above, may I as a tax-payer be assured that any money allocated to Operation Grange is devoted to a proper search for the truth and to justice for a little British girl, or that Sir Thomas be instructed to focus on Grange as a priority in his wider assessment of the work of the Metropolitan Police

I remain, Ma’am
Yours sincerely 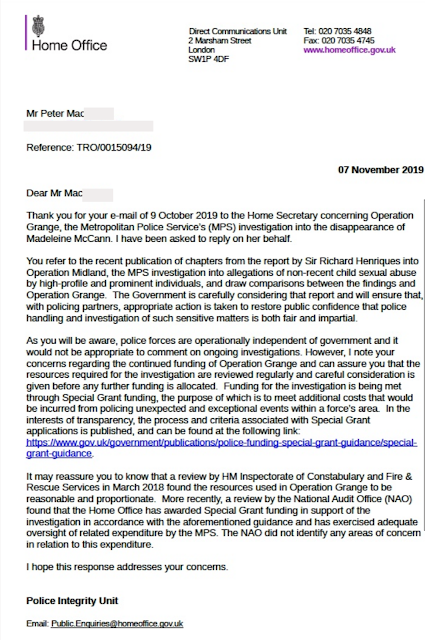